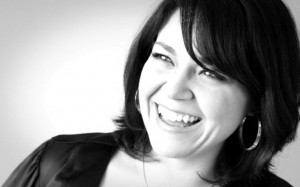 Franco-Albertan by birth, Marie-Josée Ouimet is a singer–songwriter with a passion for choral music. She has a Bachelor of music in Voice from the University of Alberta and a Master’s degree in Choral Conducting from the same institution.  In the fall of 2019, she began her Doctorate under the tutelage of  Dr. Laurier Fagnan and Dr. Tim Shantz.

She is currently conducting the choir Les Chantamis choir of Edmonton as well as Mélodie d’Amour, a choir for seniors and the vocal ensemble Clé, a choir made up of students from three Edmonton francophone schools.  She was interim conductor for Chorale Saint-Jean’s 2016-2017 artistic season.  She has also had the opportunity to offer various choral workshops among them, for the Yukon Summer Music Camp (2014) as well as the Elk Island Regional Honour Choirs (2015).

She has worked as project coordinator for the Centre de développement for 15 years. She has also worked as a vocal coach for various musical activities in the Franco-Albertan community, such as the Galala, Gala Albertain de la Chanson now known as Polyfonik, and more recently the Chant’Ouest.  Marie-Josée is a member of the Chorale Saint-Jean’s music team since 2015, and during the 2016-2017 season, she was thrilled to have the new challenge of working with the choir as Acting Director.

As a soloist Marie-Josée has had the opportunity to travel the country, singing a number of important solo performances in British Columbia, Alberta, Manitoba, Quebec and the Yukon. In 2010 she received the Prix CHFA de la chanson albertaine for her important contribution to the Franco-Albertan music scene. Marie-Josée was the principle soloist for the Elles s’appelaient Marie chorale suite presented by Chorale Saint-Jean in April of 2007 as well as all over the province of Québec in the summer of 2008 to celebrate Quebec’s 400th. She reprised the role of Marie for the 2012 Choralie International in Edmonton as well as in Vancouver and Gaspé in 2013.

In Jully of 2008, Marie-Josée was the only soloist invited to sing at the Et si Québec m’étais chantée chorale event. Featuring 1400 choristers from around the world and held at the Colisée Pepsi in front of over 9000 spectators.  She most recently has had the opportunity to share the stage with the late Tommy Banks and orchestra at the Windspear in honour of Indira Samarasekera’s  departure from the University of Alberta.

Manage Cookie Consent
To provide the best experiences, we use technologies like cookies to store and/or access device information. Consenting to these technologies will allow us to process data such as browsing behavior or unique IDs on this site. Not consenting or withdrawing consent, may adversely affect certain features and functions.
Gérer les options Gérer les services Gérer les fournisseurs En savoir plus sur ces finalités
View preferences
{title} {title} {title}